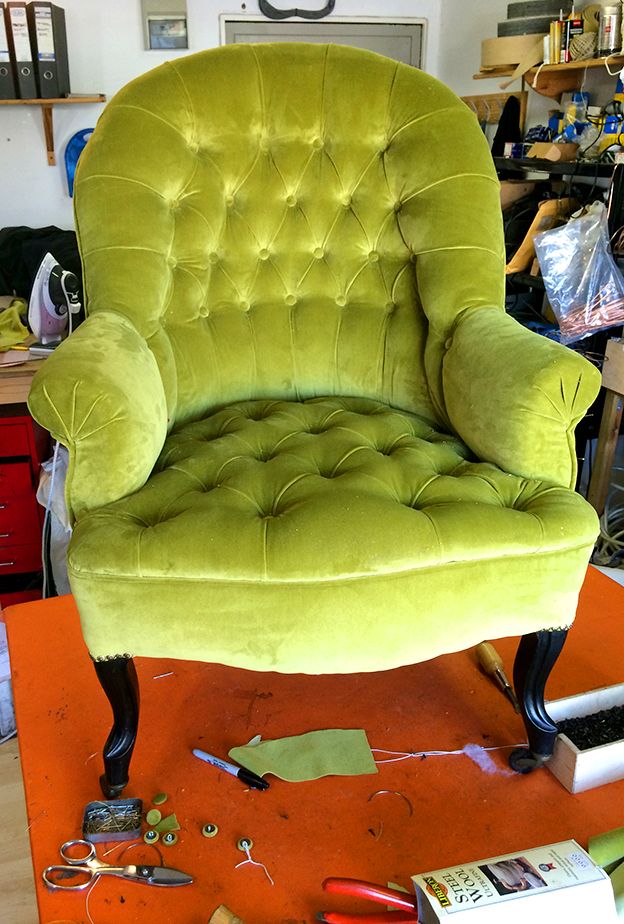 When George met Ray: A chair for an Old House New Home.

In May 2016 , after completing the first 2 shows for the BBCTV show “Money for Nothing”, something wonderful happened: I was approached by another production company to produce work on a project for a Channel 4 TV show :

The Chair I was asked to re-upholster was an 19th Century Crapaud armchair. The chair turned up at my studio first, and then later George turned up with a film crew larger than life and full of beans.His enthusiasm was infectious.

My initial enthusiasm gave way little once we started to rip down the chair. Once stripped down to the bare frame I could see that this piece needed a complete overhaul as it was riddled with woodworm.

To restore this piece, I enlisted the help of master woodwork/craftsman Tom Foy, who did an excellent job returning the stripped down frame with fresh new support and stuffing rails from which I began applying new suspension and fillings.

I decided  to apply a fully traditional approach to the suspension, fillings  and top cover , which became a point of pride for me as I wanted to produce a piece that would last many many years, using the finest traditional materials afforded in the budget.

During the process a nice travelling South African upholsterer visited my studio  lending me a hand. During the process and while under pressure to reupholster the works within the film scheduling,  he tried to convince me to use staples in certain areas which, perhaps would have speeded up the process, however, I so wanted to produce a fully  “traditional finish” I stuck to my guns.

It took a few all-nighters and even by the morning the piece was due to be collected to go up to Leicester I confess I still hadn’t fully finished stitching the final covers on!  However , with a little skill and a few tricks of the trade the chair did finally appear in the final edit and after filming I went up to Leicester and finished the chair in the clients home.

If you click on the link below you might still be able to watch the episode on Channel 4 on demand: