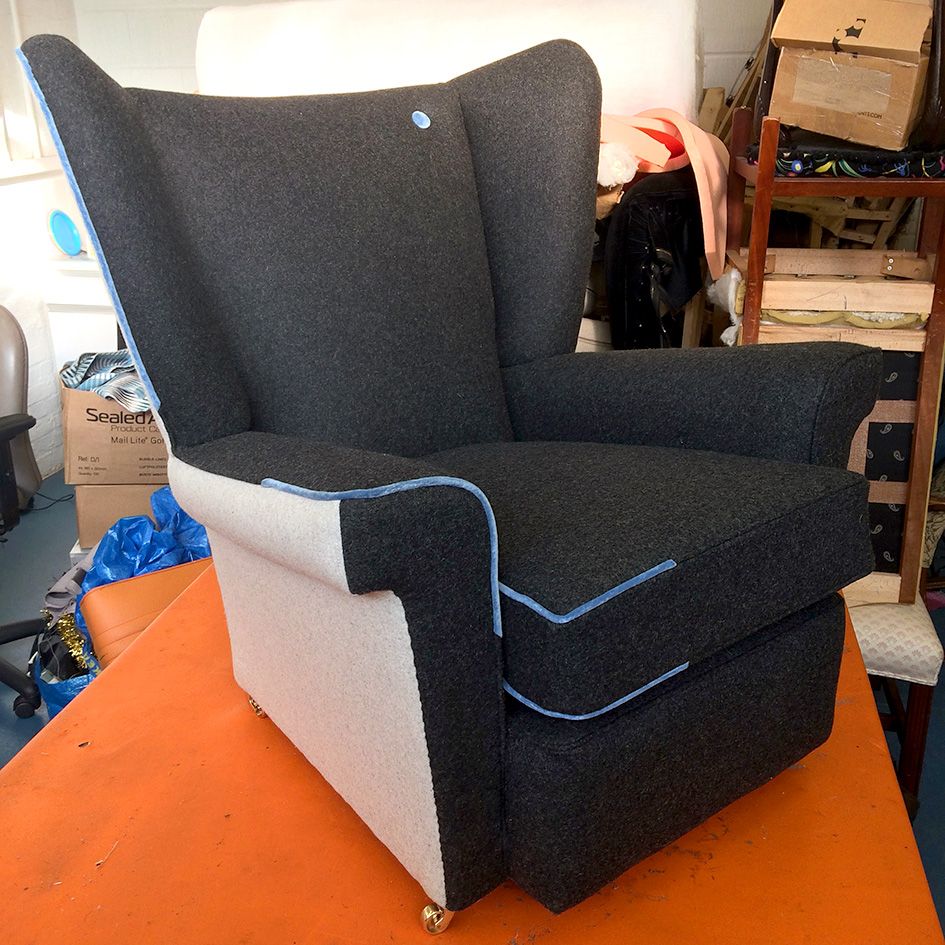 For any upholsterers and soft furnishers moving their studio to a new site, I feel for you. In my experience the process can be stressful, never-ending and exhausting! My Thanks to Anna F and Rowena Murphy for helping me with some logistics ( and some very heavy lifting!).

Imagine you have barely loaded in the last of your boxes, when an opportunity (not to mention a camera crew) arrives, to not only work with someone you’ve long since admired through social media, a certain Mr Jay Blades, but to do it on national television.

I felt exhausted after the move, but excited to finally work with a leading light in furniture up cycling. Jay was a new presenter on the TV Show Money for Nothing (BBC1 tv). He brought a couple of pieces for me to choose from.

I decided I get to grips with a sorry-looking (but full of character) Mid-20th century modern armchair.

With barely a pair of trestles and some hand tools unpacked, the “rip down” process revealed a piece which had already brought new life of its own: Among the creatures living inside the upholstery were a family of woodlice, and a particularly big green and plump garden Slug , which from the picture above, already made its presence felt by leaving a long , undulating slug trail all over the seat, inside back and outside arms and back.

An enjoyable bit of banter with Jay  and myself discussing fabric and design options unfortunately never made it into the final edit for that show. To be honest , after the studio move I was so mentally and physically tired , and the ideas I came up with for re-imagining the chair were in excess of the budget. Sometimes it’s better just to go with the flow too, as Jay supplied the fabrics and knowing the type of work he has produced in the past I had a definite idea of the type of look Jay was after. It was just up to me to put in the graft.

And so too the rip down. Having packed away my mask I had to improvise with “a knotted hanky” made from some scrap calico. I did indeed discover that this chair had plenty of life left inside it… some of it was still moving!!

Making sure no living creatures were harmed I carefully removed each of the woodlice and capturing them in a cup, went out to release them back into the wild (well, not so much wild, as the neighbouring public green/ recreational space across the road from the studio space. When it came to finding a slug , having isolated the chair from the rest of the furniture projects in the studio overnight, by the time I returned to finish off cleaning up the chair our little friend had managed to embed itself in the last bits of filling in the seat base, starved of moisture/ fluids it had dried out completely.

After putting in some hours and with great help from my assistant Rowena Murphy (A big thanks!), the chair came together quite well. Covered in a light grey and Charcoal Wool, accented with baby blue piping in just the areas I thought Jay would appreciate. As a homage to the dead slug the seat base used a limey-green wool (not sure of the source, It felt like Kvadrat’s top quality Davina range)I did pull a few all-nighters to get the last bits ready and the morning of the final shoot/big reveal I felt little “ropey”to say the least, and perhaps a little bit touchy as well,  after I got a little miffed for a millisecond there at the way one of the crew spoke to my assistant, who arrived at the studio towards the end of filming, having also put in a shift to help me get this ready ). In the end it was a job I thought reasonably well done and my big thanks to Rowena , Anna F and the irrepressible Jay Blades and the crew for their enthusiasm. Unfortunately the chair did not sell within the filming schedule so I hope it eventually finds a great home.