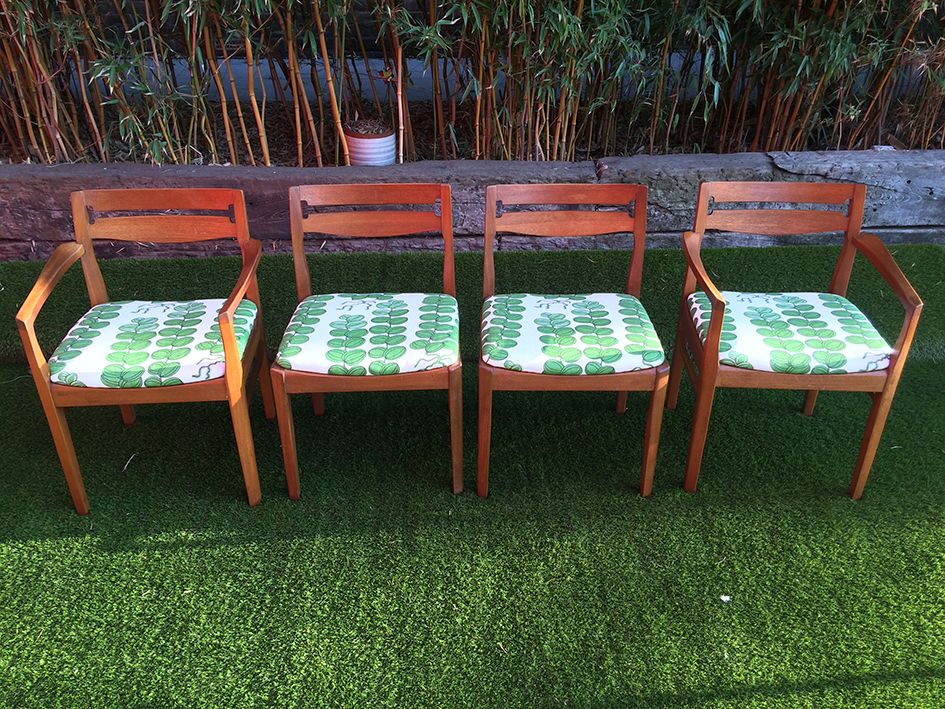 To Be Frank, I think Josef is amazing..

Two sets of  four mid 20th century modern dining room chairs were given a smart refurbishment once they arrived at my studio.

From the look of the show wood they had experienced some water damage and the fillings had completely disintegrated beyond the point from which they could be re-used.

A bit of love and attention to the show wood, some new composite foams protected with skin wadding, and a barrier cloth,

“Celoto” comes from an asian flower species characterised by a plume-like flower decoration and “Caulis” is the Latin word for flower stalk.

The thing I love about Josef franks’ work is you can clearly see and get a feel of the inspiration that Josef gained through his travels around the world,

which clearly informs the many dozens of designs he left to Estrid Ericson and the Svenskt Tenn company after his death.

A rich and enduring print and textile design legacy that transforms any piece of furniture brave enough to wish to have itself reimagined in.

A great little upholstery project which inspires me to continue to evolve my own sense of design.

With Many thanks To Nicola Holden Interiors

May & June were spent refurbishing and recovering a 2-seater Henderson Russell Balzac-style sofa, which involved replacing a broken front beam (and refitting the serpentine spring suspension system), with a piece of reclaimed oak, found at a local recycled timber merchants just down the road from my studio, along with an armchair, in Zoffany’s Romany Grey , a vanity stool in clients own fabric (unknown) and a set of 4 Mid-20th Century modern dining room chairs in Svenskt Tenn “Celotocaulis” , designed by Josef frank in the 1920’s, and a late 20th century rocking chair in Svenskt Tenn “Elefant“, designed by Estrid Ericsson. All for a lovely home in Ealing, west London on behalf of Nicola Holden Designs.