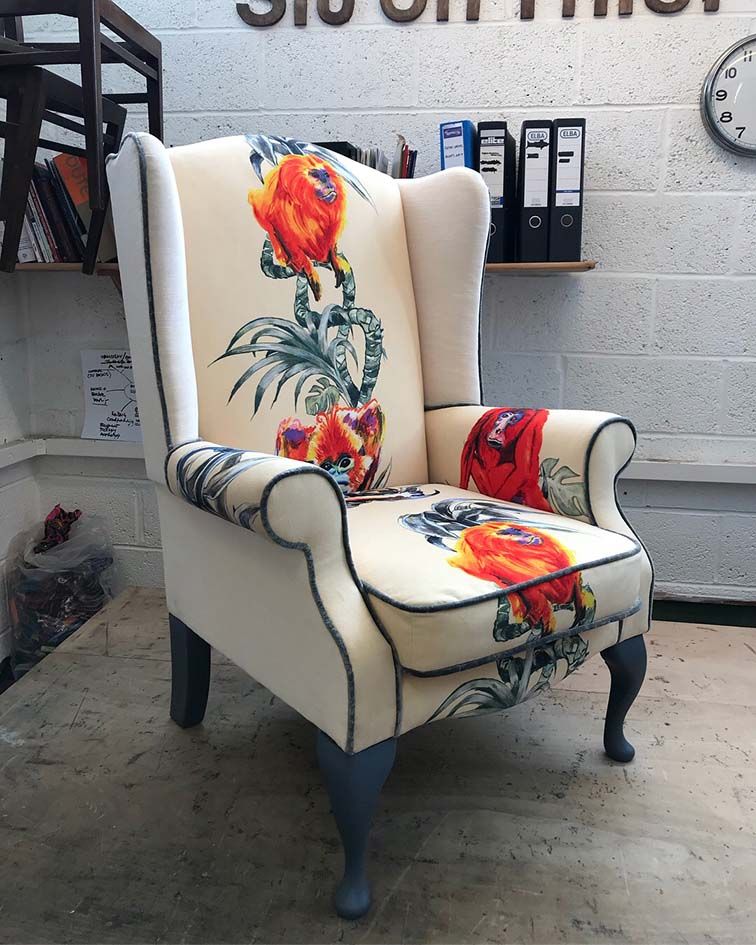 This wingback chair was originally donated to me by my good friend, super talented artist and fellow meditator Raksha Patel, which was found discarded on the site of Raksha’s old studio many years ago, at a time when she and a group of her fellow artist friends had to leave a block of studios they used in west London which were being converted into luxury apartments.

For a while there it took pride of place in my living room, giving me a place to sit after many long hours at the workbench. Although it arrived grubby and unloved, I knew If I held onto it long enough , eventually I would find the time to reupholster it.

Thanks to (repeated) episodes of Money for Nothing, a fan of the BBC show got in touch,  requesting a wingback chair to be recovered in my Monkey print, which they had seen on the show. I had other donor chairs but the shapes were not suitable so in the end I offered them the chair. Although I was alittle sad to see it go, I couldnt miss this perfect opportunity to transform the piece and, in my own fabric design.

The ” Rip down” process revealed a really shoddy build quality and a shocking use of really low grade upholstery materials, ripping out cardboard and plastic webbing , which I had ripped out and replaced with Strong elastic webbing , 120z hessian and rubberised hair behind, and to bolster the existing foams used to create the arm shapes. I went on to protect the existing foams in the back and seat suspensions, though the additional use of 12oz Hessian and Polyester Skin wadding, which was completely missing in the original chairs manufacture.

Refurbished and transformed, the old chair did take a little longer to complete than I had originally hoped. However it was finally looking resplendant in my own signature Monkey print on moleskin Velvet, trimmed with Zoffany Velvet and complimented with Sanderson Brianza . With the new Beech wood Queen anne legs , customised in my own spirit-based grey woodstain.

My Many thanks go out to Stacey Lewis, a fellow upholsterer, who came in to assist me in getting this ready, as well as helping me work through many projects in my workshop (reducing my backlog). I also want to say a special thank you to Anna Frisch for her assistance , Heritage Upholstery Supplies for helping me source the new legs. I also wish to thank Anyvan.com for the swift, safe and affordable courier delivery up to Dunstable. My Customer had originally commisioned the piece for her sister, who  upon seeing it, said

“It was better than she thought,  loves the fabric used and was over the moon!”

To meet my customers’ budget , this reproduction French Louis XIV was  rewebbed and resprung traditionally. The old degraded foams were completely replaced with a combination of rubberised hair, composite foams and a linen scrim-covered tack roll which was tacked in place for a much improved feel to the seat. The reupholstered fillings and suspension were covered in an F/R barriercloth before an original French postal sackcloth was carefully cut and fitted. Finally trimming the piece with a lush Lemonade velvet piping from Today’s Interiors.
Many thanks to Katy Chaytor-Hill for the rip down